I’ve been getting lots of contacts lately about my images of gophers. I think this is partly because it is spring on the prairies and these cute little critters are starting to appear again after a long winter underground. But I think it is even more so because they have been making the news a lot lately in Canada due to their recent designation as Pests in the Province of Saskatchewan. Inclusion in the province’s Pest Control Act means that it is now legal to exterminate these animals along with other pests such as Rats and Grasshoppers.

Although commonly known as gophers, these animals are officially called Richardson’s Ground Squirrels. They are often confused with Prairie Dogs, however that is an entirely different species. No matter what they are called they are very fun to watch and extremely photogenic. I have literally made thousands of images of these funny little critters and I’m always happy to make a few more!

The designation of gophers as pests makes me a little bit sad, because I really do enjoy watching them, but the simple truth is that the prairies are infested with these animals. In the areas where I roam I can scan the ground and see the typical grass and soil conditions in which they live and there are signs of their burrows everywhere. They are especially problematic for farmers because their burrows tend to collapse under the weight of the farm equipment, which can lead to significant damage and expensive repairs, and in areas where the population is particularly dense they can actually ravage the crops simply by eating. Unfortunately this is a man-made problem because our influence has allowed them to thrive on the prairie farmland in several ways: we grow lots of food, such as canola, that they love to eat; we till the ground which makes it easy for them to dig and survive; and we have significantly reduced the populations of their natural predators such as coyotes and foxes.

So does this make them a pest? I guess it does in the eyes of many. But I personally think that they are awfully cute and cuddly too, and I love to share my images of them! 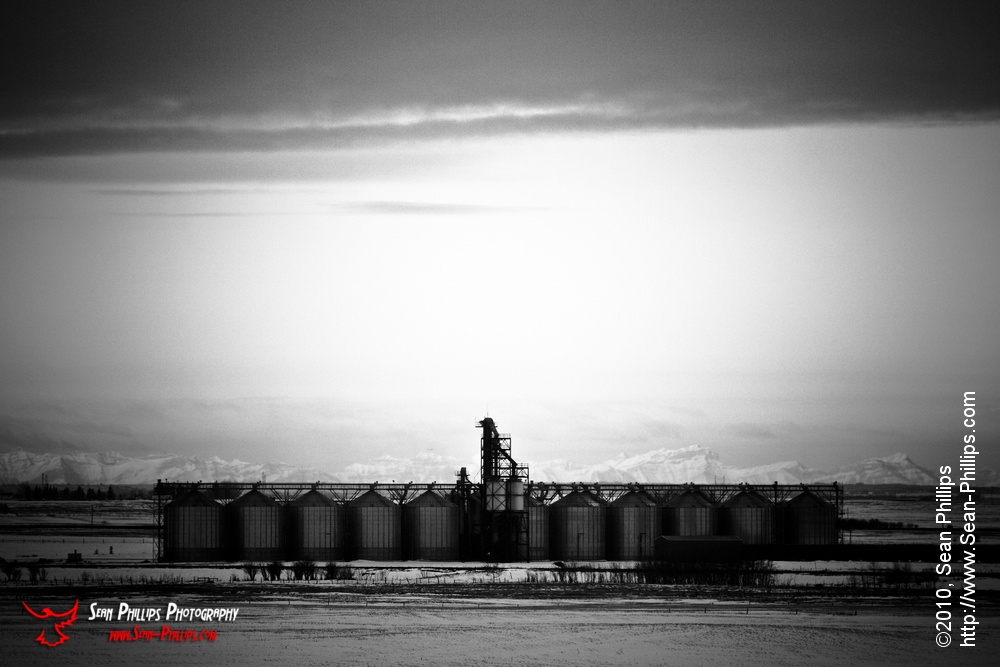 These bins dot the countryside on the prairies but rarely do so many congregate in one location, and rarely can you see them with such a beautiful open view of the Rocky Mountains behind them. I plan to revisit this spot several times to catch this collection in different light and from many other angles. 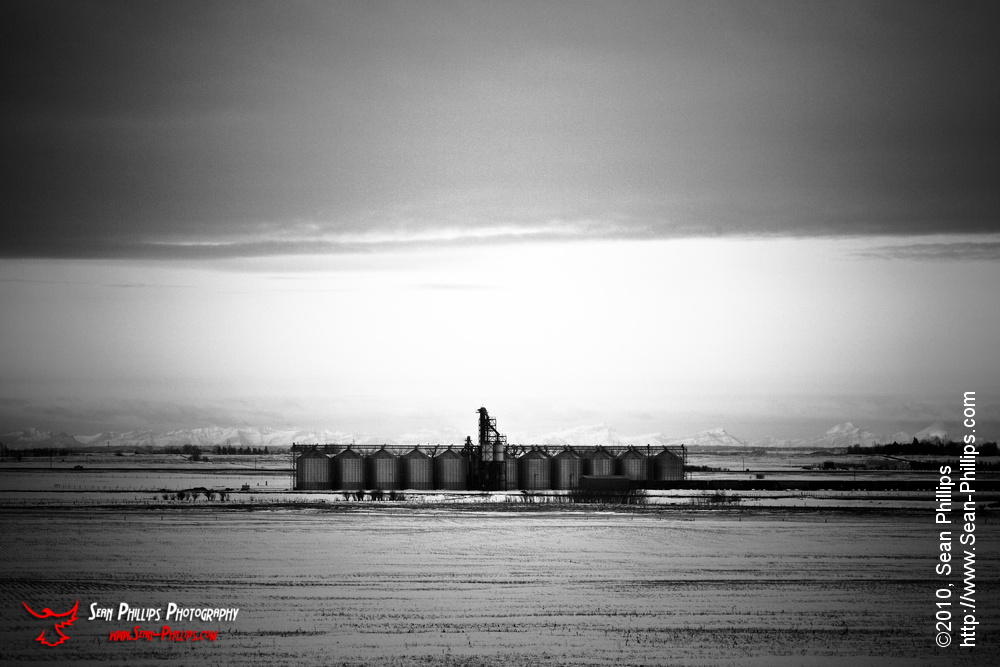 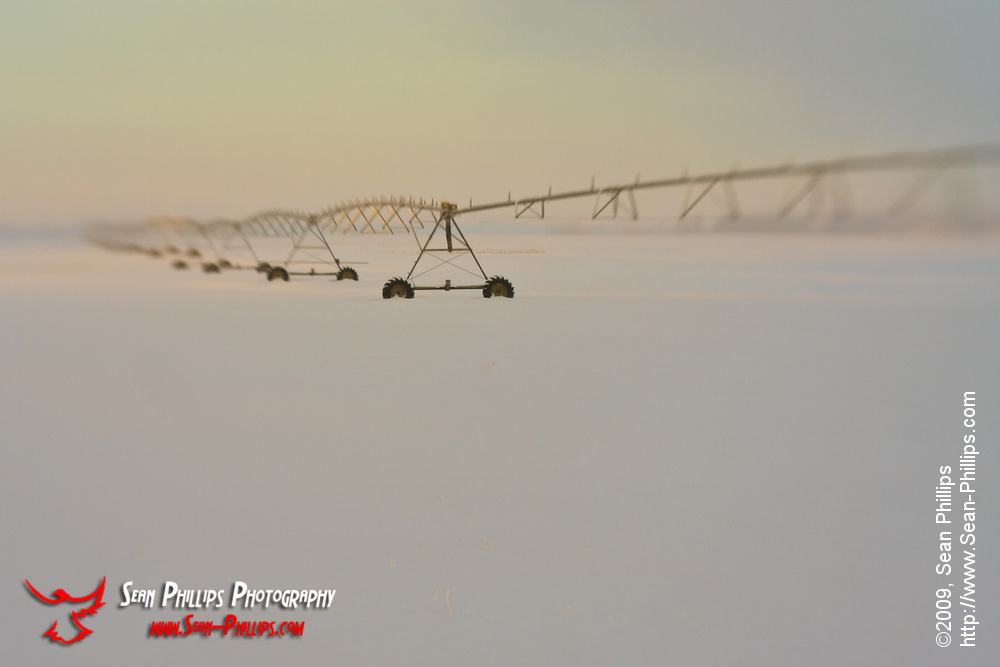 It was amazingly cold out the other day and the ice fog hanging over the prairie landscape turned everything pure white. These irrigation pivots were beautiful as they loomed over the fields below. I’m always amazed by how the changing seasons completely transform the places around us. Something as simple as a little bit of snow on the ground can make the familiar things look completely foreign, and the mundane things beautiful. It’s worth it to pause every now and then and to take a good look at the things around you. You might be amazed by what you see, and by how little you really remember about what it normally looks like. 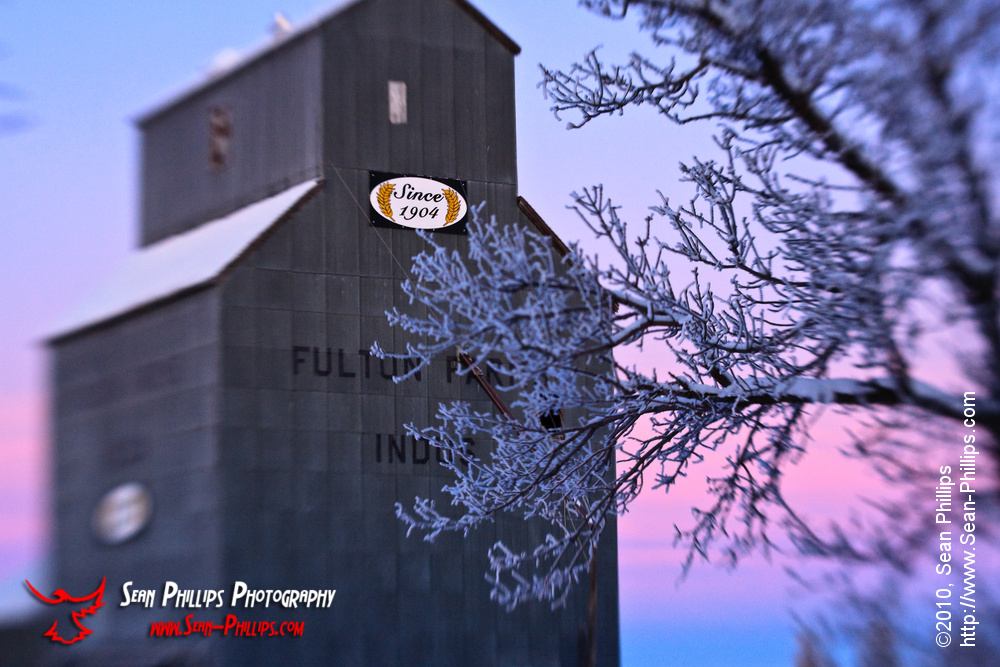 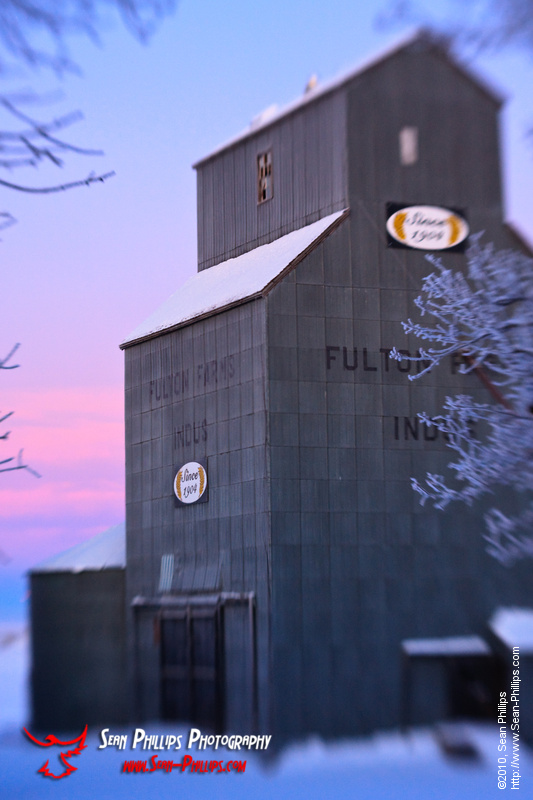 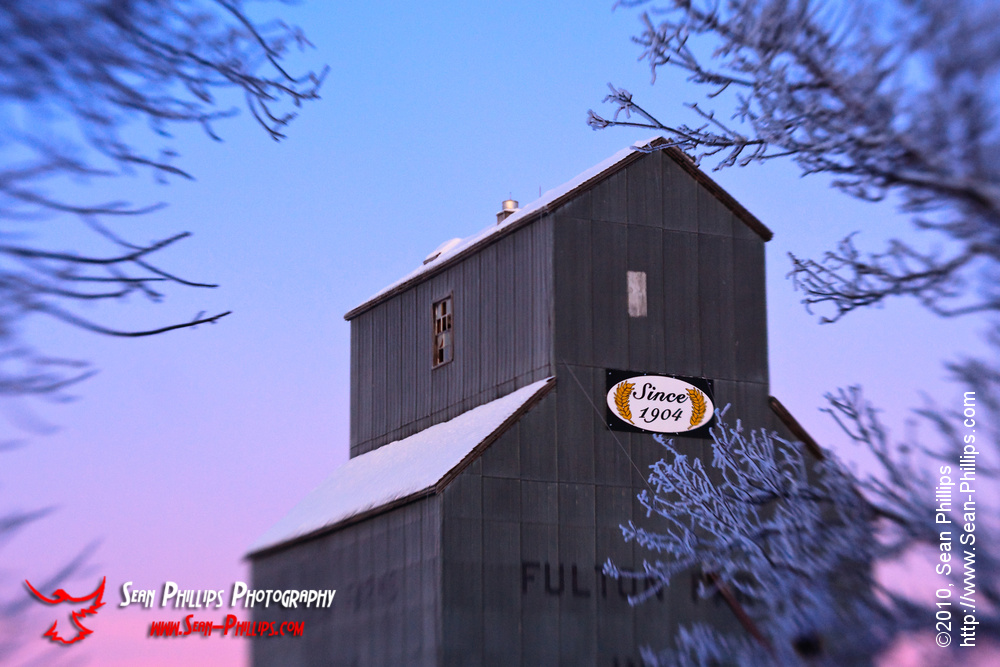 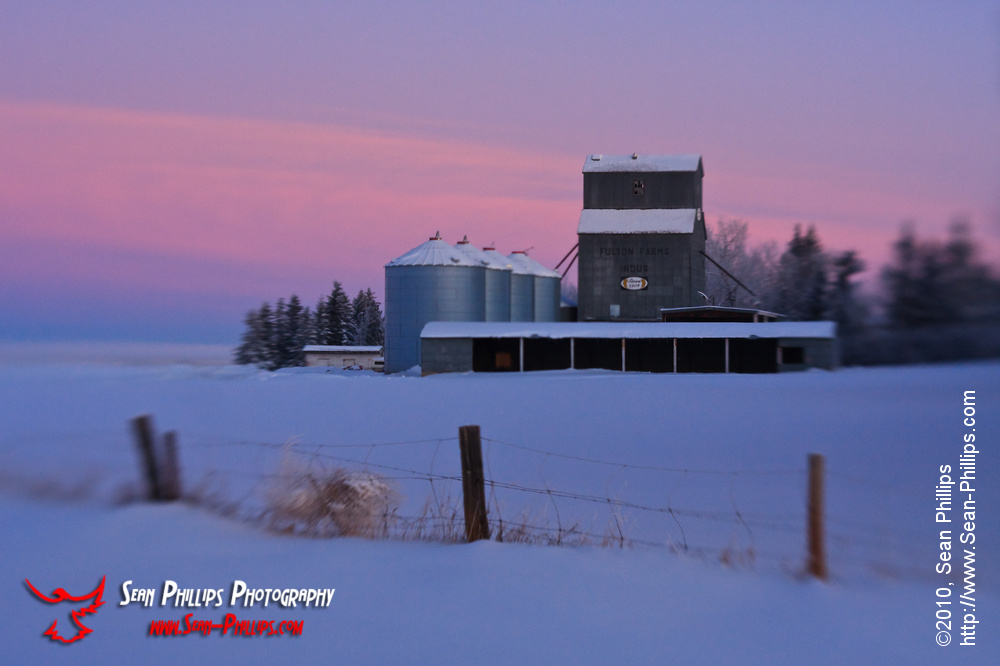 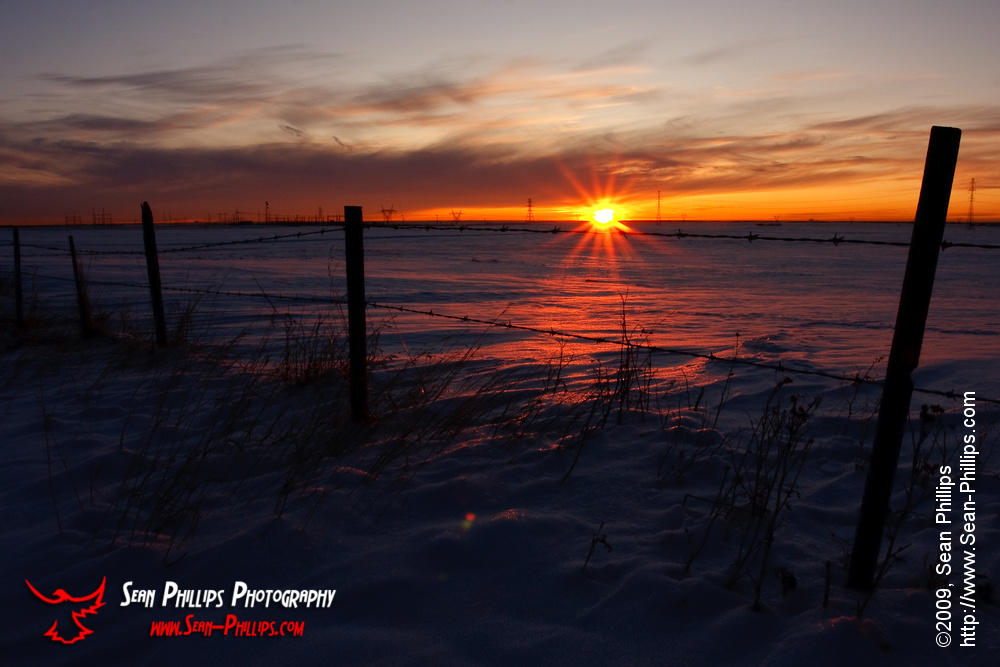 The winter landscape on the prairies can be so beautful that sometimes I find it hard to decide what image to make next. This was one of those examples where I was torn between wanting to make images of the grain bins that I knew would be glowing a beautiful red as the sun rose, or to try to create the starburst effect you see here just as the sun peeked over the horizon. In the end I managed to do both, but I really only got to try one composition for the starburst shot, and then I ran back over to the bins to make a few more images there. Fortunately this old fence was close enough to the bins that I was able to use it to give the starburst shot some foreground interest. 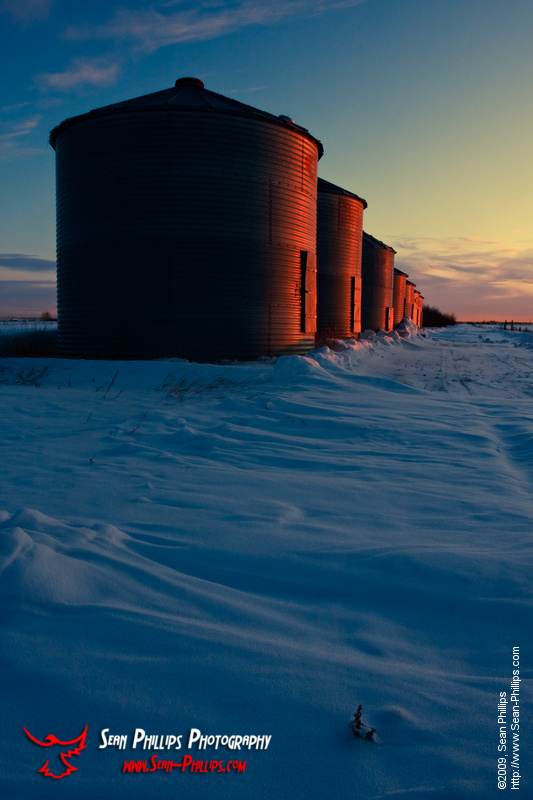